Research results set out in the 2017 edition of Lloyd’s Technology Radar – the first to zoom in on low carbon energy and power and energy  – reveals that renewable power generation technologies are now cost competitive with fossil fuels, and ongoing innovation is likely to yield further gains.

“We are very encouraged by the findings, which highlight not only a growing optimism across the industry but a vigorous and intelligent debate about the pathways to decarbonization,” Lloyd’s Register Energy Director Alasdair Buchanan commented upon the report’s release.

“Clearly, there are many uncertainties about exactly how the industry will evolve, but what is inarguable is that the conversation is no longer about ‘should we?’ but ‘how should we do it?’”

In addition to delving into a wide variety of data and information sources spanning the global power-energy value chain, researchers sought out insights and opinions of industry leaders and obtained views from nearly 600 professionals and experts. 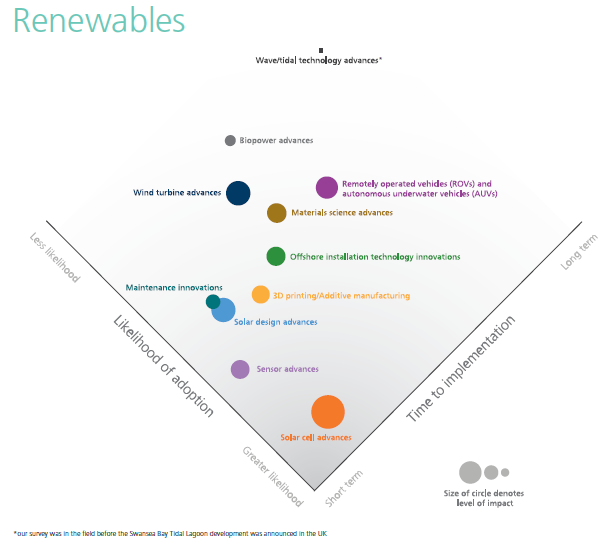 Among the report’s key takeaways, Lloyd’s Register found that low-carbon generation technologies have declined in cost to the point where they are now competitive with conventional fossil fuel power generation.

Respondents singled out innovations in solar PV cell technology as the most likely to have a major impact across the power generation market landscape going forward. According to Lloyd’s Register:

Advances in software associated with power transmission and distribution (T&D) topped the list of responses when survey participants were asked which innovative power-energy tech would be most likely to arrive quickest and be adopted widely.

Surprisingly, given all the industry and media attention lithium-ion battery-based energy storage has been attracting, survey respondents believe innovations in electrical, rather than chemical or mechanical, energy storage technology will transform the industry.

Turning to obstacles that slow the pace of technological implementation in the renewable energy sector, Lloyd’s Register found that while 71 percent of respondents agreed the scale of renewable power generation projects had increased, the numerous and variable factors associated with deployment are hindering growth. 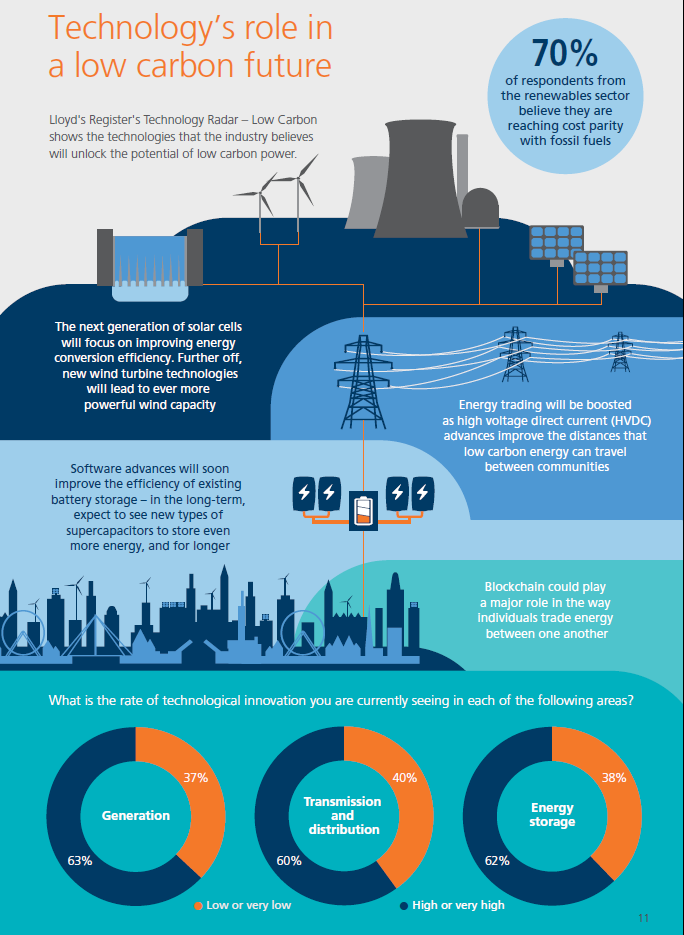 Lloyd’s Register focused on the oil and gas industry in the first and second editions of its Technology Radar research report series. It changed tack in producing the 2017 edition, instead zooming in on the low-carbon industry, markets and technology. In addition, a sister report focuses specifically on the nuclear power sector. As the global power-energy research organization explains:

“Our role at LR is to ensure that we provide that independent viewpoint to help government, energy producers, manufacturers, regulators and policy makers to the energy industry extract energy safely, and to deliver energy sustainably, with minimal risk to people and to the environment, and in socially responsible ways.”