Coronavirus Checklist: What to Buy Now to Be Prepared
Home » Buildings » Duke Energy Gets Bullish on ¨Green¨ Microgrids

The nation’s power utilities are facing pressures of unprecedented breadth and depth – from reducing greenhouse gas emissions and pollution to keeping up with new, cleaner and more efficient power technologies and energy policy reforms. The EPA’s October 23 release of the final version of President Barack Obama’s Clean Power Plan is just the latest in what has been a growing wave of disruptive change emanating from the White House, state capitals, environmental and public interest groups, not to mention a growing number of new clean power technology vendors and multinational corporations.

Facing an increasingly pressing need to restructure their organizations to take advantage of new innovative technologies and adapt to much more dynamic market and regulatory environments, leading U.S. power utilities are doing much more than playing the role of investors. Whether owning them outright or providing them to customers, leading U.S. utilities are ramping up R&D projects, installing and operating renewable power facilities, smart grid and stationary battery storage infrastructure – the core elements of ¨green¨ microgrids.

Recent developments at Duke Energy, the nation’s largest utility, offer a case in point. On October 22, Duke announced it is acquiring Phoenix Energy Technologies, which specializes in providing energy management systems and services to commercial customers. Acquiring Phoenix is just one of a string of recent announcements that indicate Duke management is ready to swim with as opposed to against the tide of change that has resulted in record deployments of distributed renewable energy and clean technology systems, products and services across the U.S.

A Herald of Green Microgrids to Come?

In a September 24 feature story, the Charlotte Business Journal reported on Duke Energy’s installation of a ¨green¨ microgrid at Charlotte’s Fire Station 24, which happens to neighbor the utility’s McAlpine solar and energy storage test facility. Though operating at a small-scale, performance of the integrated solar-battery storage platform has been promising enough to warrant attention from Duke’s commercial energy services unit, as well as its regulated utilities, Duke Energy senior project manager Tom Fenimore highlighted in an interview. 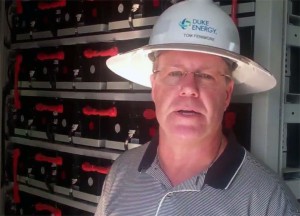 ¨If you look at the classic utility business model of owning and operating generation systems, we’re uniquely positioned to provide microgrid solutions to our customers,¨ Duke Energy senior project manager Tom Fenimore asserted in an interview.

A member of Duke’s emerging technologies R&D team, Fenimore and colleagues are in a privileged position when it comes to gaining a broad-based perspective of the full range of innovative power technologies and companies looking to gain traction among utilities, as well as businesses and homeowners.

¨We’re assessing and scanning technologies coming into the marketplace,¨Fenimore elaborated. ¨We’re approached by lots of companies; we engage with them, try to understand the threats and opportunities they may present, and in some cases actually work with them to build-out, test and learn what they can and can’t do, as with Fire Station 24. 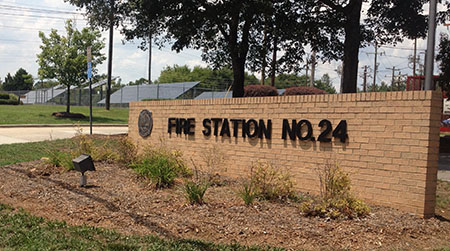 In cases that warrant doing so, Duke’s emerging technologies group undertakes a technology transfer, handing new technology off to one or more Duke business units. That could be one of its regulated utilities, which operate in six states, or its commercial business unit, which is free to operate across the U.S. and internationally.

Duke’s commercial energy business group, for instance, is offering microgrid-as-a-service to businesses, state and municipal offices and agencies in California, Fenimore pointed out. ¨Partnerships,¨ he added, ¨are looming in that regard.¨

Duke’s commercial services business group includes a majority share of REC Solar, which has and is installing and operating commercial solar PV systems in a growing range of U.S. states, California and Hawaii in particular.

Furthermore, Duke could offer microgrid products and services abroad via Duke Energy International, which operates in Latin America, Fenimore continued. ¨We could hand these technologies off to them,¨ he said.

Bearing In On a New Course?

Rogers has also been criticizing Duke executives for fighting what now amounts to a ¨rear-guard¨ political lobbying campaign opposing supportive policy reform, such as the Obama administration’s Clean Power Plan. It’s precisely these sorts of strategic plans and actions representatives from more than 195 nations will seek agreement on at the United Nations Framework Convention on Climate Change (UNFCCC) conference to take place in Paris this December.

Utility executives may well perceive the institutional clean energy policy frameworks being established by the Obama administration and its counterparts in China, the E.U. India and elsewhere as ¨writing on the wall¨ they cannot afford to ignore, or perhaps even continue to oppose too strongly.

Furthermore, they indicate that Duke Energy is finding the ways and means of adapting to a much more dynamic business and market environment and make use of a full range of innovative power technologies designed to enhance the overall sustainability of the organization and all its stakeholders. Green microgrids figure to play a key role in that evolution.