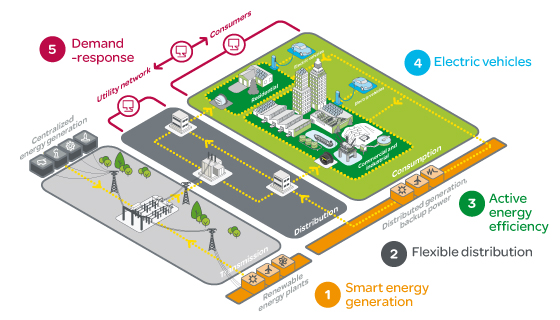 A new generation of battery-based energy storage, energy efficiency and smart grid technologies are being combined to serve as core elements of zero or low-emissions microgrids designed to aggregate and manage networks of distributed energy resources (DERs) in residential and commercial buildings, on college and university campuses, at industrial and municipal facilities, and in communities in the U.S. and across the globe.

Venture capital (VC) funding for smart grid companies surged three-fold quarterly and nearly 50 percent annually in 1Q 2017 as $164 million was invested across 14 deals. That compares to $46 million in six transactions in 4Q 2016 and $110 million in 14 in 1Q 2016, according to Mercom Capital Group’s latest “Battery Storage, Smart Grid, and Energy Efficiency” market research report. 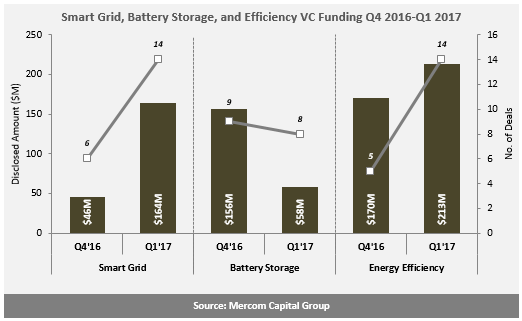 On the flip side, VC funding, including private equity and corporate venture capital investments, for battery storage companies dropped sharply quarter to quarter. A total of $58 million of VC was invested in battery storage companies across eight deals in 1Q this year. That compares to $156 million in nine in 4Q’16, a drop of nearly 99 percent, Mercom highlights in a news release.

VC investments in battery storage companies were up year over year, however. 1Q’17’s total of $58 million was 7.4 percent higher than the $54 million invested in 1Q´16. 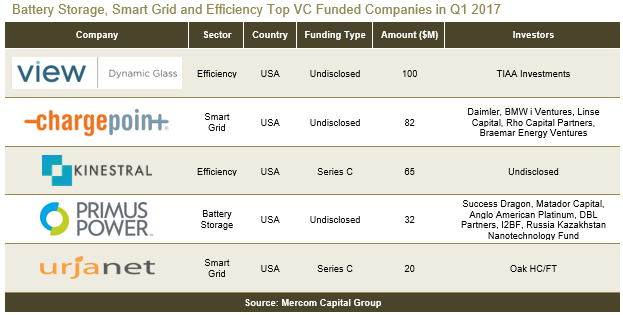 The $82 million in venture capital raised by ChargePoint was the largest VC smart grid company investment in 1Q. The Florida-based company aims to build out electric vehicle (EV) charging infrastructure nationwide. Notably, both Daimler and BMW 1 Ventures participated in the funding round.

Somewhat surprisingly, flow battery storage companies, as opposed to their lithium-ion counterparts, attracted the most VC capital in the battery storage sector in 1Q, with 15 investment groups participating in funding rounds. Primus Power raising $32 million was the largest for the quarter.

Battery storage companies also raised capital in two debt and public market financing transactions totaling $22 million, down 60 percent in two deals on a quarterly basis. There was one as one battery storage project funding, for $152 million announced in 1Q, according to Mercom.