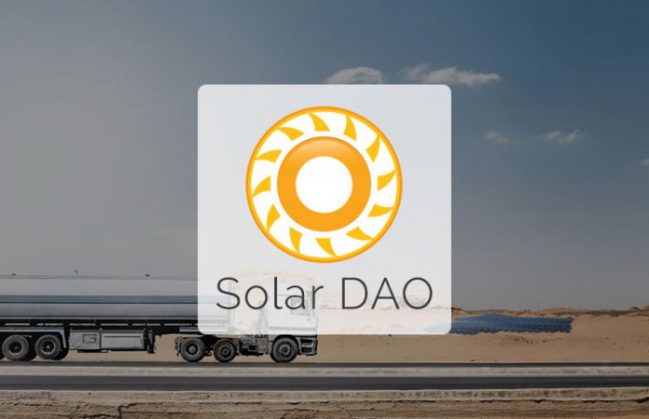 Blockchain-based closed-end solar project investment fund Solar DAO is prepping for the launch of its initial coin offering (ICO). A digital autonomous organization (DAO) built to run on the Ethereum platform, Solar DAO intends to sell 80 million digital currency tokens (SDAO) at USD1.00 each in two phases – a preliminary ICO to run from July 27-August 31 and a primary ICO at the end of October.

Anyone can subscribe for a share of SDAO’s ICO, prospectively opening access to solar energy investment opportunities that are by and large the exclusive domain of super-wealthy investors with access to private equity and venture capital funds.

SDAOs grant owners rights to a proportionate share of any and all profits Solar DAO may earn by investing in solar power development projects. Any profits will be automatically and digitally distributed quarterly to SDAO token holders’ Ethereum wallets, Solar DAO explains.

Upon opening of the ICO, SDAO tokens will be executed autonomously as per rules established by Solar DAO’s founders as embedded in Ethereum smart contracts. Undistributed tokens are to be removed from circulation by smart contracts, upon completion of which the ICO will be closed out and no additional SDAOs will be offered.

Essentially, Ethereum-based DAOs consist of an integrated assemblage of digital smart contracts and a digital ledger/bookkeeping administration system. As explained on Investopedia: “Ethereum is a different blockchain from Bitcoin and was created with the intention to allow self-executing smart contracts to be coded directly into it, permitting trusted transactions and agreements to be carried out among disparate, anonymous parties without the need for a central authority, legal system, or external enforcement mechanism.”

Early bird investors to the core ICO are to receive the following bonuses:

The Solar DAO  closed-end investment fund will invest ICO investment proceeds in solar energy projects worldwide over the next four years, focusing on opportunities in Israel (Solar DAO’s home base), Portugal, Kazakhstan and the Ukraine, according to the company’s press release.

In the works since 2012, Solar DAO’s founders ostensibly bring a lot of experience to the table. The founding solar project development team has been working in the field since 1991 and has managed development of 270-MWs of solar power projects in Russia and 150-MWs in Kazakhstan. They also have carried out four solar PV cell and module production facility projects in Russia, Spain, Germany and South Africa.

At present, Solar DAO is working with Russia’s UNISOLEX to invest in solar energy projects worldwide on behalf of investors.

These projects will be refinanced so as to free up capital to invest in new projects, thereby raising the asset base of the Solar DAO closed-end investment fund.

Upon the ICO’s closing, Solar DAO’s founding team intends to market the SDAOs owned by ICO owners so as to create liquidity and a secondary market. The founding team also intends to buy back SDAOs and sell them on to major investors, according to the news release.