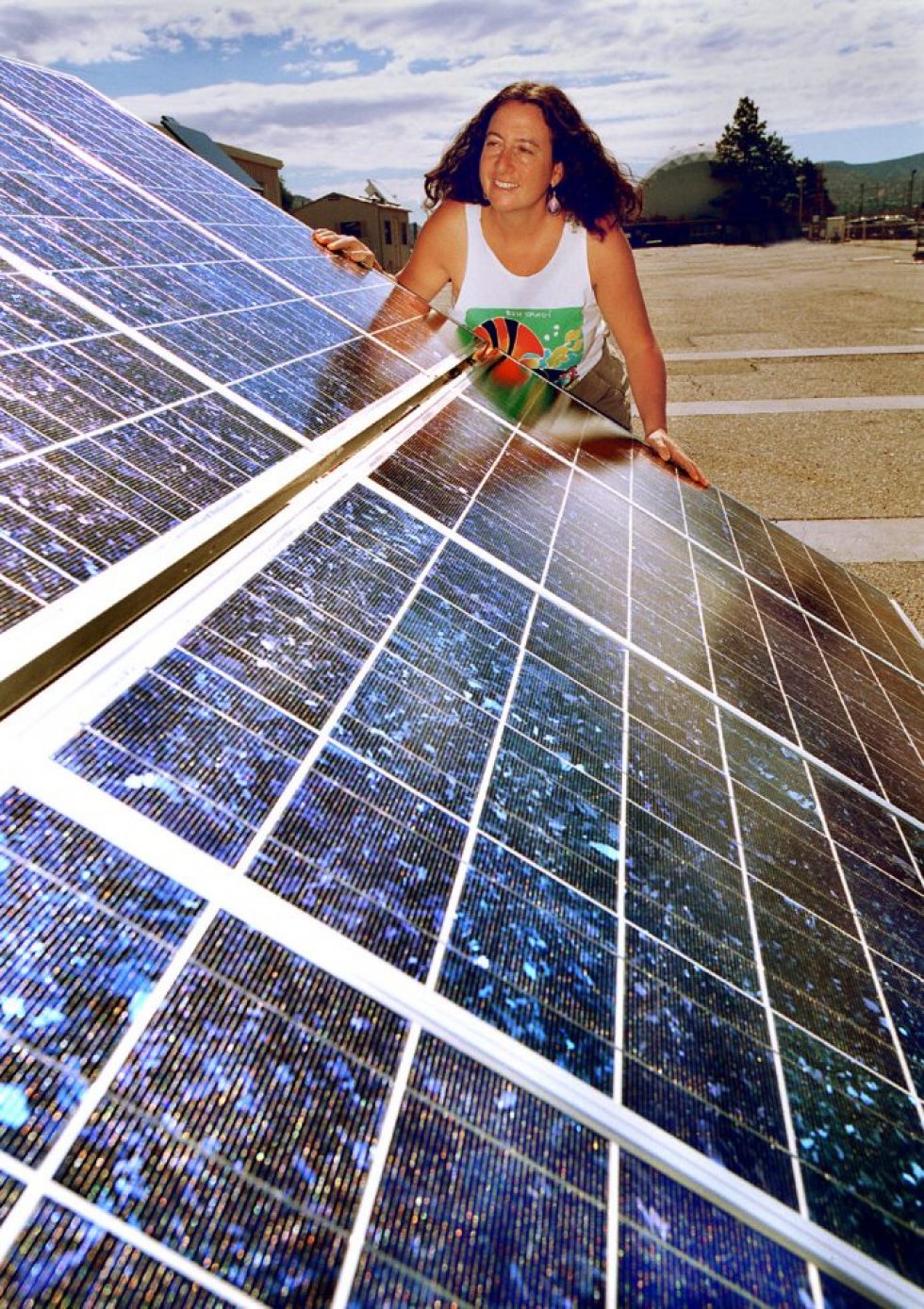 A legacy of starkly unjust natural resource exploitation and environmental injustice casts a long shadow across the history of energy resource development on Native American lands in the Southwest. The capacity of the home solar-storage systems NTUA is installing is only sufficient to meet the most basic modern needs, but they serve as a significant step up the “energy ladder” and the program is establishing a foundation for further sustainable energy development and use.

A Wheel of Socioeconomic and Environmental Injustice

Development and growth of large cities, metro and suburban areas – not to mention much of U.S. agricultural production – would not have been possible without the water, energy and mineral resources drawn from Navajo Nation and other Native American lands.

Too often, what’s been left behind for tribal communities to deal with has been unfulfilled promises of equitably distributed income, wealth, community development and employment opportunities, along with the necessity of shouldering long-term, unaccounted for social and environmental costs: polluted air, diminished and degraded water resources, and contaminated lands, Roger Clark, director of air quality and clean energy programs at the Grand Canyon Trust, explained in a 2013 interview.

Home to the Hopi and Navajo nations, as well as Utes, Apaches and other Native Americans uranium and coal mining and the construction of mega-sized coal-fired power plants in the Four Corners region – such as the Mojave and Navajo Generating Stations – for decades supplied the electricity that has supported the boom in population and economic development throughout the western U.S. 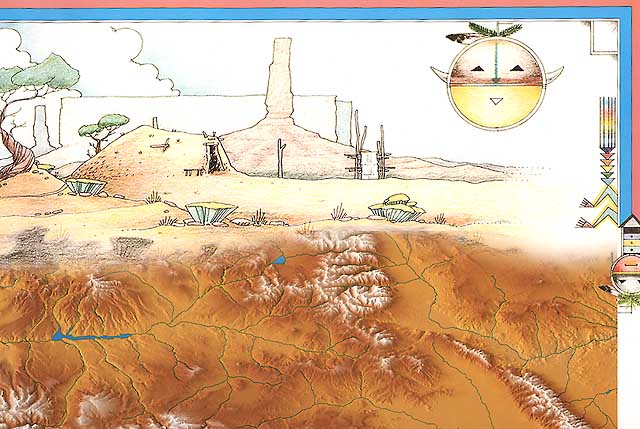 For decades,  uranium and coal mining and the construction of mega-sized coal-fired power plants in the Four Corners region – such as the Mojave and Navajo Generating Stations – have generated the electricity needed to support booming development and growth of what are now the largest cities, suburban areas and industry economic engines across the western U.S.

Freshwater from the Colorado and other western rivers and watersheds running through Native American lands has been, and continues to be, a critical, pivotal element supporting rapid population growth and urbanization, as well as the creation of some of the world’s most productive agricultural lands across the western U.S.

The benefits have been accrued by privately owned corporations and urban residents, however. Some 40 percent of Native Americans living in the Navajo Nation lack access to adequate, reliable sources of electricity or running water. Local government authorities and communities aren’t compensated for water resource use, and many live in the pollution plumes created by mammoth coal-fired power plants and uranium mines, Roger Clark, director of air quality and clean energy programs at the Grand Canyon Trust, explained in a 2013 interview.

“They are essentially a Third World nation in the heart of U.S. Southwest, providing subsidized electricity and water for Southern California, Las Vegas, Phoenix, Salt Lake City, and Denver…Capitalists without a conscience externalize the costs, take the profits and leave the lasting costs to shareholders and those living on the land, those not powerful enough to defend themselves,” Clark summed  up. 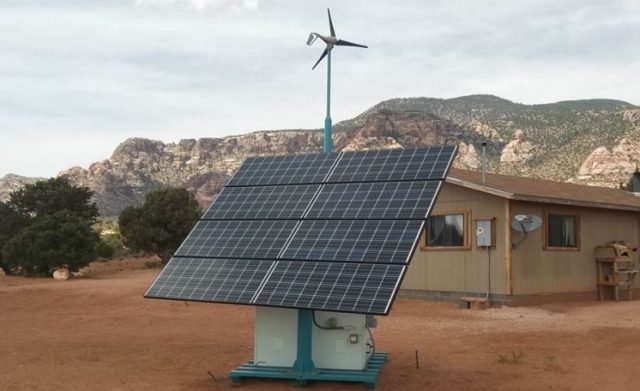 In her report for Cronkite News, Columbus zooms in on the home,  property and life of Helen Salazar, an 88-year old Navajo woman who lives in a traditional hogan amidst the spectacular natural landscape of Monument Valley, part of the Navajo Nation.

Salazar has lived without electricity in her home her entire life. She dries meat and uses an ice chest to preserve perishable food while making weekly trips to a local store.

Electricians from the NTUA recently installed a small off-grid solar PV system and wind turbine on her property. On Nov. 3, they switched on a light bulb in her kitchen for the first time.

“I am old and tired and exhausted. I requested a solar energy system so I can have refrigerated food,” she told Columbus via a translator.

The off-grid home solar energy systems NTUA is installing across its service territory cost less than half the $35,000 to $50,000 it could cost to extend power lines one mile, but they only provide a limited amount of power, Columbus points out.

“The younger the people, the more electricity they use,” commented Sandra Begay, an engineer with Sandia National Laboratories in Albuquerque, New Mexico. “What I’ve heard about and what I’ve observed is that if there’s a grandma, and her grandkids come for the weekend and visit her, they tend to drain the batteries on these off-grid units very quickly.”

Residents, such as Thomas Walker, Jr., a board member of a local school powered entirely by wind and solar energy, and family turn to propane lamps for lighting. Ironically, high-voltage transmission lines and towers can be seen clearly from the Walker family’s property. 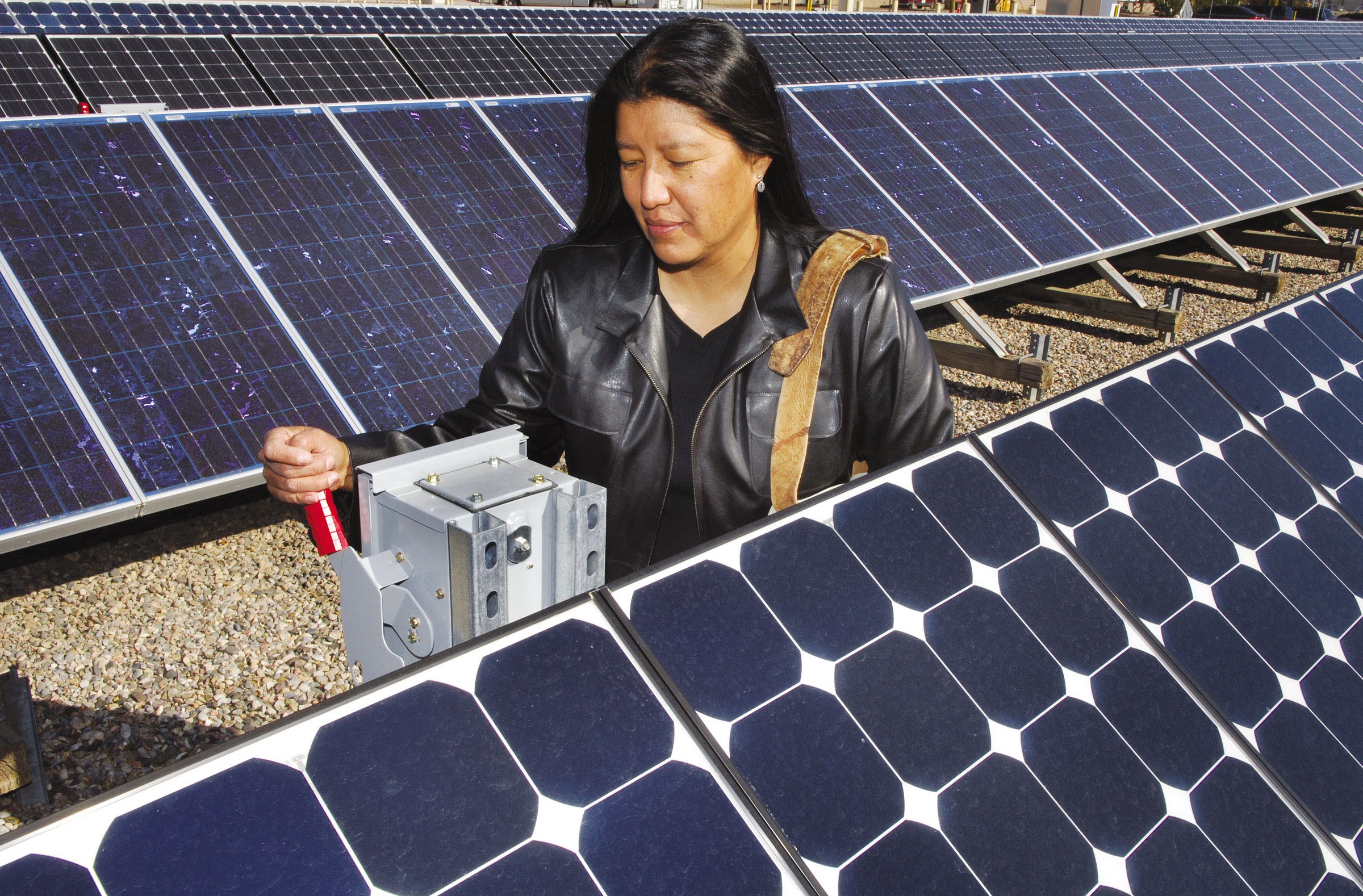 California’s installed solar power generation capacity totaled 15,049 MW as of year-end 2015, the highest in the U.S. Just tapping into a small percentage of that would be more than sufficient to upscale NTUA’s off-grid solar-storage program and greatly improve socioeconomic development, life and living conditions.