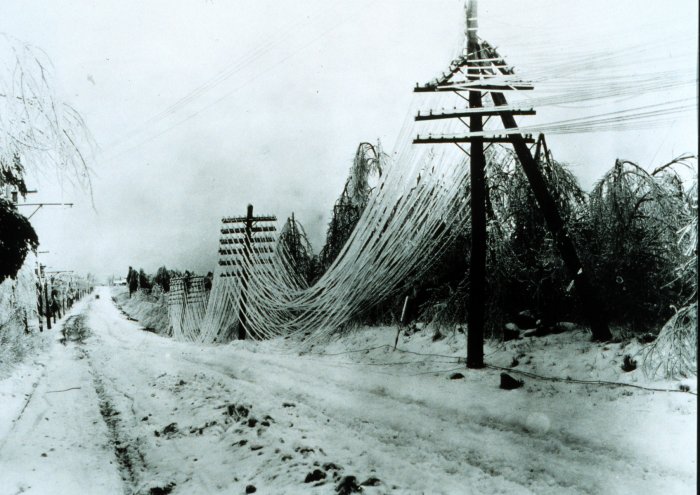 Nearly 25 years after a historic ice storm paralyzed wide sections of western and northern New York, much of the state remains exposed to increasingly severe weather. The following report from Livingston County News recounts the hazards of a town-wide blackout as Geneseo looks at microgrids to create pockets of resilience.

If you remember anything about the Ice Storm of 1991, you remember the indiscriminate havoc it wreaked in killing power to hundreds of thousands of homes, businesses, government offices and emergency response facilities across New York.

Residents in many areas were asked not to flush toilets because sewage plants had no power and authorities feared backups, burst pipes and flooded basements.

It took days and, in some cases, longer to restore power because of the extensive damage caused to sprawling power distribution networks.

With those kinds of problems in mind, the New York State Energy Research and Development Authority (NYSERDA) threw its weight behind the New York Prize initiative which is designed to ensure that, in the event of severe weather events – such as the ice storm – power to critical facilities is maintained.

SUNY Geneseo and the village applied jointly for grant funds as part of the initiative, and were one of 83 applicants to receive $100,000 to fund a feasibility study to identify ways in which a microgrid could be created and used in the village and on campus.

What is a microgrid?

One big problem with the state’s, and the country’s, current power grid is that energy is produced in huge, centralized facilities and then transported across hundreds of thousands of miles of transmission lines to end users.

That current model, said Peter Constantakes, a media relations representative with NYSERDA, falls short in a couple of key areas that the New York Prize initiative is seeking to address.

One thing the program is hoping to encourage is the creation of a more efficient energy distribution system by decreasing the distances energy has to travel before it gets to end users.

“There’s so much energy lost in transporting that energy from point ‘A’ to point ‘B’,” added Dan DeZarn, SUNY Geneseo’s director of sustainability. “If you have decentralized energy production… you don’t have to make nearly as much energy to do the same work.”

Another goal of the initiative is to create resiliency in a system that, in its current form, is susceptible to storms.

“After Superstorm Sandy, a lot of people lost power, so improving resiliency was crucial,” said Constantakes. “New York was hit with three or four major storms that caused big problems. If the grid goes down, a microgrid can maintain power for vital equipment and facilities.”

In a retrospective on Sandy, Time magazine reported that, even though the storm made landfall in only a handful of states along the East Coast, more the 8.1 million homes in 17 states – as far west as Michigan – lost power.

“You had electricity being shut off in far-ranging areas that were not really touched by the storm,” said DeZarn.

That’s where the micro grid comes in. By creating a hyper-local power grid, where energy is produced, transported and used, all within about a mile radius, communities can ensure that its most critical facilities have power, even in the event of a widespread and lengthy outage.

“They (microgrids) will most of the time, when weather is not an emergency situation, supply renewable energy to the grid,” said DeZarn. “Instead of what happened with Sandy, where you had this huge grid outage, these microgrids would be islandable. You’d have a transfer switch that would allow you to cut off from the rest of the grid and then have critical facilitaties islanded so they could continue to function and have power during a big storm.”

The primary source of power production that the feasibility study will focus on can be found at the village’s wastewater treatment plant on Riverside Drive.

It’s an anaerobic digester that takes in organic waste such as food, sewage and even lawn clippings, and spits out methane gas, which can be burned to generate electricity.

DeZarn’s hope is that channeling the college’s food waste from dining halls and restaurants to the digester will allow it to produce enough energy to supply 100 percent of the wastewater treatment plant’s needs.

“The wastewater treatment facility is at the core of the project,” said DeZarn. “The college relies on (it) because our sewage goes through there. In the event of an emergency, not having the toilets back up is a pretty positive thing.”

[wpsm_quote author=”” float=”left” width=”25″] In the event of an emergency, not having the toilets back up is a pretty positive thing.[/wpsm_quote]

The channeling of food waste to the village’s digester would also have the added benefit of reducing how much the college currently pays to have it transported off site.

Rebecca Stewart, marketing manager with SUNY Geneseo’s Campus Auxiliary Service, said that, on average, the college throws out around 30,000 pounds of food waste each year from its three dining halls and six restaurants and pays more than $16,600 to have it transported off site.

“We’re looking forward to the day when we can say that none of our food waste goes to a landfill,” said Stewart, who is also chair of CAS’ sustainability committee. “We’ve been looking into different measures to divert our food waste from landfills for a number of years… and the (this) is one method we’re looking at.”

An anaerobic digester has been used to great effect at Noblehurst Farms in Linwood.

Christopher Noble, Noblehurst’s vice president, said the farm works with Geneseo Wegmans and York Central Schools, among others, to collect food scraps primarily for use in the digester.

“The Noblehurst digester combines the manure from our dairy cows, food scraps and waste from the local food manufacturing industry to produce enough electricity to power 100 percent of the needs of the dairy farm and the adjacent Craigs Station Creamery,” said Noble, who also manages the farm’s separate waste collection business, Natural Upcycling. “Any extra (is) sold back to the utility for distribution to the surrounding community.”

The methane produced by Geneseo’s digester isn’t currently used to produce energy. Instead, it’s burned off in an on-site furnace.

That being said, Dan Quinlan, the village’s water and sewer foreman, said he thinks the digesters could produce enough energy to meet the plant’s energy needs.

“I think it could,” said Quinlan, adding that the digester doesn’t currently operate at capacity. “The biggest thing is funding, what it’s going to do for staffing here – I don’t know if there’s enough (staff) to do it.”

Another issue with Geneseo’s digester, said Hatheway, is that it’s relatively small.

“The problem that seems to be lurking over our heads is that the plant is too small,” he said. “They were able to do this down in Ithaca, which had a plant five or six times larger than ours, so that’s an issue. There’s no doubt there’s gas that’s produced and that it could be utilized, but the question is ‘is the infrastructure that’s required to capture that gas more expensive than the value you’d get out of the gas?’ ”

That’s why the study’s scope doesn’t end at the digester.

DeZarn admits that “there’s no way” the village’s small digester is going to make enough energy to power “anything beyond itself.”

That’s why the study is looking at the possibility of creating other energy-production facilities.

“We’re also looking at a fairly large solar array and the possibility of doing co-generation with our (central steam) plant,” said DeZarn. “Most of the college is still supplied with heat and hot water from that plant, we have that big stack there and there’s a possibility of recovering some energy from the lost heat coming off of that stack by basically running a microtubule that is powered by waste heat.”

Maximizing the amount of energy produced in the village and on campus increases the number of critical facilities that can be brought onto the microgrid system and, ultimately, can stay powered during an outage.

“We’re including the Geneseo Building in that list of structures that should be perhaps considered to be part of the microgrid,” said Hatheway.

Also on the list are the college’s University Police station, health center and multi-use buildings such as Schrader Gymnasium “that could house people in the community in the event of a large storm or something like that.”

In the village, the fire department and even the Livingston County Jail are on the list of facilities that could be brought on to the microgrid.

“All of that’s in close proximity to the power production,” said DeZarn. “When we were applying for the grant, they were saying anything within a mile radius would be fair game to be looked at, and that’s pretty much the whole village.”

The feasibility study should wrap up around the end of February.

If Geneseo is selected as one of 10 Phase 2 winners, it’ll get up to $1 million to actually design its micro grid.

Seven Phase 3 winners will be announced in fall of 2017 and receive up to $5 million to actually construct their micro grids.

Regardless of whether Geneseo progresses in the initiative, DeZarn seems content with the $100,000 already in hand and the information the feasibility study will yield on the village’s digester and the channeling of the college’s food waste.

“This is a really solid collaboration between the college and the village, a situation where both are working together in a way that can affect a lot of people in a positive way,” he said. “Anything else that happens from it is gravy.”