Rapidly declining costs and performance improvements, along with supportive energy and power market policy and regulatory changes, continues to fuel strong growth in distributed renewable energy investment and installations and, more recently, stationary battery storage systems. Bringing together and integrating these and other components, microgrids are seen as an increasingly important driver of emissions-free electricity and the decentralization of power generation and distribution in the U.S.

Complex and at an early stage of evolution, microgrid installations vary widely in important respects, such as type(s) of generation technology, purpose and overall capacity. Generally speaking, microgrids are more efficient and may well prove more resilient and reliable than conventional grids. They’re also flexible enough to offer a variety of advantages and benefits as compared to traditional centralized and fossil fuel-fired power generation and distribution systems, proponents contend.

Looking to add clarity and help industry participants and other interested parties better define and understand the nature and scope of microgrid projects under way today so that they can develop better technology and business development strategies, Navigant Research recently published, ¨Microgrid Multi-Client Study,¨ a study produced in collaboration with 12 microgid project sponsors. 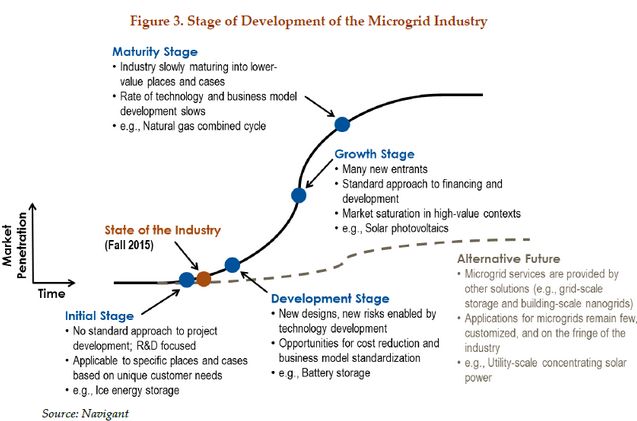 Gaining traction across the wide variety of end-users – rural communities and remote, isolated facilities in particular – microgrids present both substantial opportunities and threats to entrenched electric utilities, as well as broader-based skepticism that typically comes with change and adoption of new technologies.

Furthermore, growth in residential solar PV installations has driven growth and the emergence of power ¨prosumers.¨ That, in turn, is resulting in growing public interest in, and calls on government leaders, to institute industry and market reforms that support power production at the homeowner scale, such as net metering.

Adding to these benefits is microgrids’ flexibility in terms of use. This extends across: primary or quick-start back-up generation, emergency recovery, load shifting, peak shaving and ancillary grid services, such as frequency and voltage regulation.

At present, campus/institutional microgrids account for the largest segment of the market. Growth is expected to accelerate in the utility microgrid segment as states continue to enact policy and regulatory reforms in order to meet power infrastructure needs.

Similarly, community microgrids are also growing rapidly in order to enhance grid resiliency in the face of climate change, as well as realize associated social and environmental advantages and benefits.

Among the biggest challenges, a lack of established microgrid business models translates into significant financial risk, according to Navigant. Related to this ¨bankability¨ and ¨replicability¨ pose substantial hurdles for microgrid project developers, supply chain participants and market growth. Uncertainty regarding technologies used and legal issues pose challenges as well.

While these market conditions bode well for early market entrants, the range and degree of risks, as well as the complexity of microgrid projects, led Navigant to conclude that partnership and collaboration are essential elements of success. 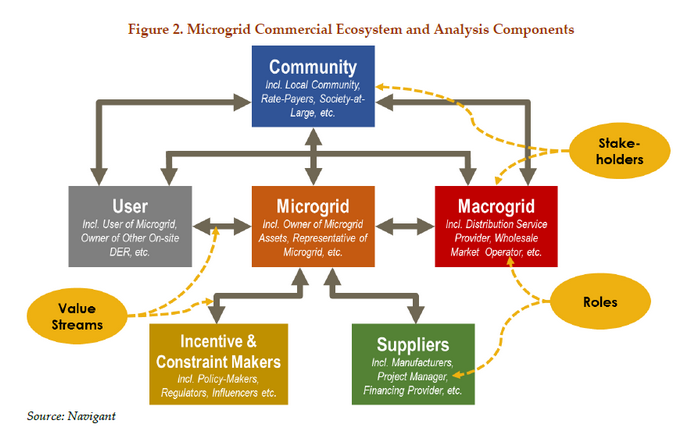 To start, Navigant developed a set of definitions and frameworks to a common system of classification and nomenclature. A variety of tools was then developed, including a Commercial Ecosystem and Business Model Framework. Others included a Strategy Development Process, Strategic Positioning Matrix and Role-to-Role and Role-to-Value Compatibility Matrix.

In addition, Navigant identified types of customers, geographic areas, regulatory environments and energy market environments conducive to being early microgrid adopters. All this was then used and taken into account in organizing, analyzing and otherwise studying data from grid-connected ¨islandable¨ microgrids that can be isolated from the broader power grid to serve multiple local end-users.

The researchers concluded that a variety of potentially viable strategic microgrid development paths exist. Given this uncertainty and the complexity of microgrid project development, they highlighted the importance of ¨careful segmentation and targeting of markets and customers.¨

They also concluded that optimizing microgrid assets for grid-connected and ¨blue sky¨ operation were the most viable to yield revenue streams sufficient to add resiliency by adding ¨islanding¨ capability.

Looking ahead, Navigant expects technological advances and cost declines will continue. The need to customize installations for particular customers and conditions will persist, however. That will constrain developers’ ability to replicate systems widely, as well as hinder overall industry scalability, according to Navigant.

Developing standardized ¨plug n’ play¨ microgrid solutions designed to meet the needs of clusters of customer, geographic and market types may afford one way around the issue. Regulators could ease the way forward by instituting market rules that enable project developers and investors to monetize the various benefits microgrids can provide.

That said, the microgrid market could remain small, fragmented, with developers specializing in designing highly customized systems that meet the needs of individual customers.

Along this line, the combination of building building-scale ¨nanogrids¨ and grid-scale storage solutions may afford developers an opportunity to earn returns attractive enough to justify making investments, Navigant says.