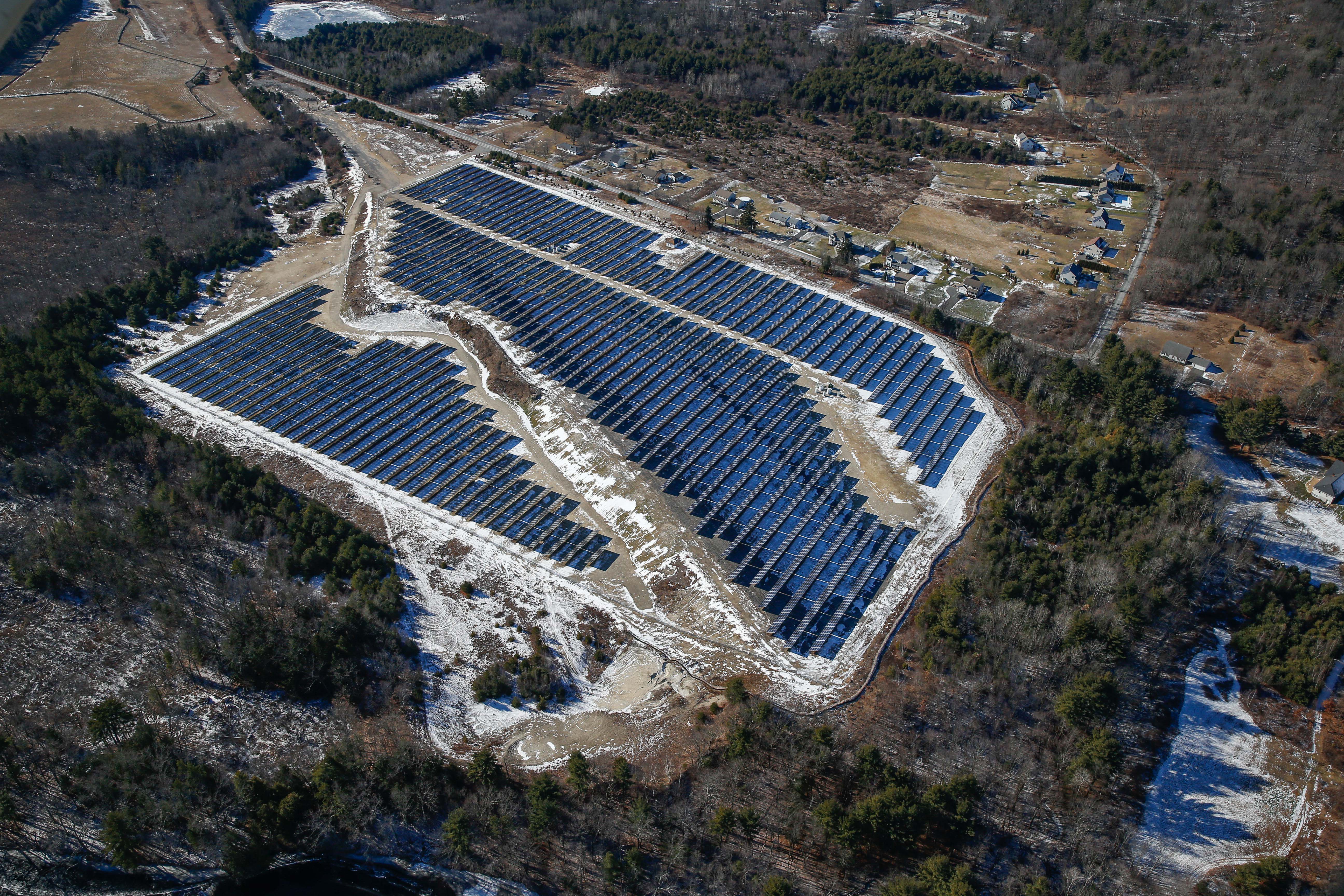 Borrego Solar on February 8 announced the completion of the first and largest solar brownfield facility under the Massachusetts SREC II solar energy incentive program. Developed by Borrego, Syncarpha Capital and Renewable Energy Massachusetts (REM), the 6-MW solar PV array is up and producing clean, renewable electricity on the site of the former Palmer Metropolitan Airfield.

Effectively serving as a community solar power resource, the towns of Leicester, Spencer and Worcester State University stand to benefit from expected energy savings – projected to run into millions of dollars – that result from their purchasing the net metering credits the Palmer Airfield solar PV array generates. A Massachusetts ¨Green Community,¨ the Town of Palmer will benefit by receiving some $2 million in personal property tax revenue over the project’s 20-year life, Borrego highlights in a press release.

The U.S. is home to more than 450,000 brownfields – unused property that poses potential environmental hazards. Eyesores as well as potential health and safety threats, brownfield sites reduce urban property values. Rehabilitating them pays off, and in more ways than one, according to a July, 2014 National Bureau of Economic Research (NBER) working paper entitled, ¨The Value of Brownfield Remediation.¨

The Value of Brownfield Remediation

It stands to reason that brownfield remediation would yield a variety of valuable environmental, and hence health and safety, benefits. A July, 2014 working paper from the National Bureau of Economic Research (NBER) was the first to put forth a methodology that puts a monetary value on brownfields remediation spanning the more than 450,000 EPA Brownfields program sites.

NBER researchers determined that remediation increased the value of individual brownfield sites $3,917,192, with a median value of $2,117,982. That compares to an estimated per-site cost of $602,000. In percentage terms across the study’s nationally representative sample, EPA-supported clean-ups resulted in property price increases of between 4.9% and 32.2%.

Taking the most conservative estimate of the value of an average site cleanup, we find that it indeed passes cost-benefit analysis by an order of magnitude based on the expenditures from the Brownfield Program.[/wpsm_quote]

Installing solar PV on brownfield sites can make a significant addition to the value and benefits derived from remediation efforts. The Palmer Airfield PV array is the first and largest Massachusetts SREC II project to be qualified by the state’s Department of Energy Resources (DOER).

Most of the solar energy projects carried out in the state’s SREC I program through 2013 were built on greenfield sites. DOER and other stakeholders pointed out the added shared benefits and value that could be realized by including incentives to develop solar energy projects on landfills and brownfields in SREC II.

Palmer Airfield, for example, was cleaned up after 75 years in service with help from a $200,000 EPA Brownfields remediation grant. Syncarpha Capital joined with REM in 2014 to develop a solar PV array on the site, negotiating a lease with the landowner. They also carried out other required project development tasks, including permitting, initiating the interconnection process with National Grid, successfully negotiating with Worcester State University to be a key energy off-taker, and earning DOER’s SREC II Brownfield Qualification designation.

“Not only will multiple public sector entities benefit financially and directly from this project, but, in addition, underutilized remediated brownfield land will now be used to provide positive environmental impact. Syncarpha and our development team partners are proud to a part of this endeavor.”

Borrego Solar built the array, negotiated and finalized off-taker agreements with the Town of Leicester and the Town of Spencer. “This project is an economic and environmental success for so many parties: it benefits the airfield site owners, the Town of Palmer, the three energy off-takers, the project development partners, and the local contractors who built it,” Borrego Solar project developer Zak Farkes stated.

“The economic impact alone is impressive, but also consider the fact that this project will offset more than 4,000 metric tons of carbon dioxide annually, and supply enough clean electricity for roughly 1,000 homes. It’s clear that beneficial projects like the Palmer Airfield need to be replicated throughout the Commonwealth.”