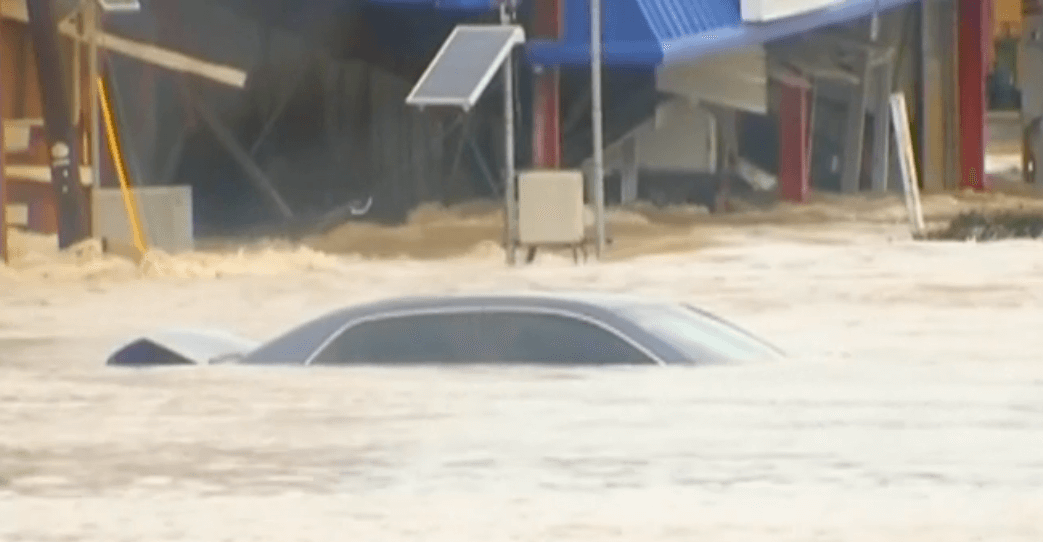 Should we focus on stopping the root causes of climate change or start adapting to the new reality? Energy storage does both.

[wpsm_quote author=”Kevin Trenberth – U.S. National Center for Atmospheric Research” float=”right” width=”40%”]“Global warming is contributing to an increased incidence of extreme weather because the environment in which all storms form has changed from human activities.”[/wpsm_quote]

Solar panel owners had another reminder this weekend that without energy storage they are as vulnerable to power outages as everyone else. This past weekend, over 100,000 people lost power in The Bahamas, North Carolina, and Georgia. This ‘once-in-1,000-year-storm’ overlapped with ‘unprecedented’ rain events killing 20 people in the French Riviera and 152 outside of Guatemala City.

CO2 Reductions Depend on Energy Storage

Over the next few months, over 190 countries are meeting in Paris to commit to lofty goals to reduce or eliminate their CO2 emissions. Their ability to achieve these goals (and beyond) without going bankrupt, and the ability for communities to be resilient during extreme weather events both depend on the technologies, business models, and partnerships being discussed at the Energy Storage North America Expo (ESNA) in San Diego next week. Advancing and deploying energy storage technologies is essential to tackle climate change and build resilient communities.

Whatever the cause, maintaining power during widespread power outages can be extremely valuable.  UCSD, seen as a model for microgrid resiliency has an electron microscope that takes six weeks to recalibrate. For the rest of us, the ability to keep critical services, hospitals, and water treatment facilities operating during power blackouts can be the difference between life and death.

Energy storage is also addressing the achilles heel of variable renewable energy sources like solar PV and wind turbines. They are now among the cheapest energy sources available, but they are not dispatchable resources. In other words, they make energy when the wind blows and the sun shines, not necessarily when it’s needed. But energy storage has the potential to shift that mismatch and free the technologies from perceived limitations.

Elon Musk can be credited with bringing the idea of solar plus battery storage to the mainstream.  Over 3 million people have watched the product launch of Tesla’s Powerwall. Using variability as an excuse for not adopting renewable energy is increasingly be met by skepticism.

The potential for energy storage to fundamentally change the way humans interact with energy doesn’t end at the grid. “There isn’t an energy demand on earth that can’t be met by renewable energy, improved efficiency, and cheap energy storage” says Jake Scherer at SolarRenter pointing us to battery powered airplanes to demonstrate his point.

The stakes are high for Utilities

Electric utilities have a lot to gain and everything to loose from energy storage. Between the Clean Power Plan and Renewable Portfolio Standards (RPS), utilities are being incentivized and required to adopt clean energy from multiple angles. Many utilities initially reacted to renewable energy and batteries as more of a threat than an opportunity, and some are still lobbying against distributed solar adoption. There’s no question that renewable energy does represent a threat to traditional business models of utilities, but that’s not the whole story.

It is appropriate that the event is taking place in California where the state has plans for 1.325 GW of energy storage. ESNA will bring together a panel with representatives from SDG&E, SCE, and PG&E to discuss lessons learned from the first 350 MW of procurement. With such high targets, it’s no surprise that California is home to no fewer than ten leading startup companies in energy storage.

There is some sense of urgency and a lot of hope surrounding the conference. There is a sense that the train will soon leave the station and utilities can’t afford to miss it.