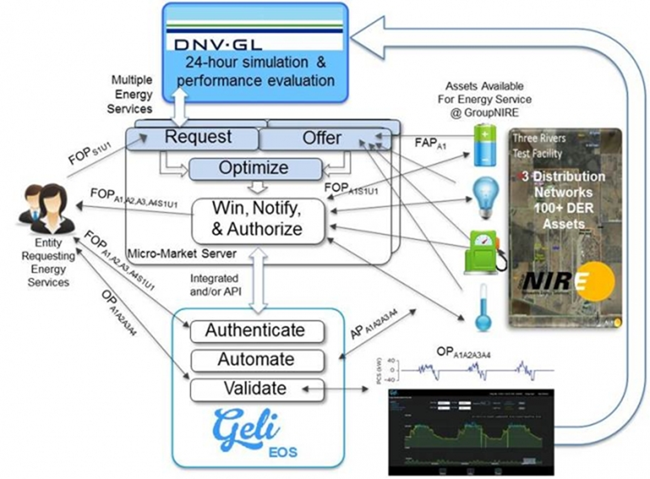 Aiming to unify distributed renewable energy, energy storage and smart grid systems – not to mention numerous and varied connected devices and equipment in homes, businesses and industry – microgrids have quickly emerged as a key element of integrated climate-energy policies, programs and investment. Relying extensively on automated machine-to-machine communications, they’re being embedded as key aspects of the Digital Economy.

Deployment of microgrid and other innovative distributed energy technology, for instance, are at the center of the boom in Internet of Things (IoT) technology and investment. ARPA-E in December announced $33 million in NODES (Network Optimized Distributed Energy Systems) funding for 12 projects that aim to develop innovative hardware and software that integrate and coordinate grid generation, transmission and end-use energy systems.

One of the 12 is taking place in Lubbock, Texas, where DNV GL, Group NIRE and Geli (Growing Energy Labs) will use the funds to develop and operate an ¨Internet of Energy¨ (IoEn) platform that integrates management of as many as 100 distributed energy resources (DERs).

The ¨Emerging Internet of Energy¨
In order to demonstrate the value and benefits to utilities, the Lubbock IoEn platform is to support simultaneous market-level regulation and energy-to-grid dispatch from DERs. An association of independent energy experts that also provides third-party certification of DER hardware and software, DNV GL will work with project partners to install Geli’s IoEn platform at Group NIRE’s microgrid test facility in Lubbock.

“DNV GL’s core role is to provide greater certainty to power systems planners and grid operators – who will increasingly be called upon to manage massive volumes of distributed energy assets – by validating operational performance and emerging economic models within a real-world, utility-connected microgrid,” Senior Consultant Michael Kleinberg was quoted as saying.

There were 124 microgrids with a rated capacity of 1,169 MW up and running across the U.S. as of year-end 2015, and experts are forecasting capacity will grow nearly 145% to reach 2,850 MW by 2020, according to information presented at the 2016 ARPA-E Energy Innovation Summit, which took place in Washington, D.C. February 29-March 2.

The value of the U.S. microgrid market is expected to rise even faster – nearly 270% to more than $3.5 billion by the turn of the decade, according to a study – ¨Distributed Generation: Cleaner, Cheaper, Stronger: Microgrids in the Evolving Power System – Pew Charitable Trust’s Clean Energy Initiative presented during the conference.

Texas is one of the many U.S. states where regulatory authorities, legislators, industry and public interest groups are engaged in a process of updating power and energy policy in light of climate change, the need to modernize power grids, reduce greenhouse gas (GHG) emissions, and incorporate growing distributed renewable energy generation capacity, battery-based energy storage storage, and smart grid technology.

Along with technological advances such as the Lubbock IoEn, smoothing the regulatory path for utilities and other stakeholders – municipalities, community organizations, universities and businesses, for instance – to deploy renewable microgrids makes good sense – economically, socially and environmentally.