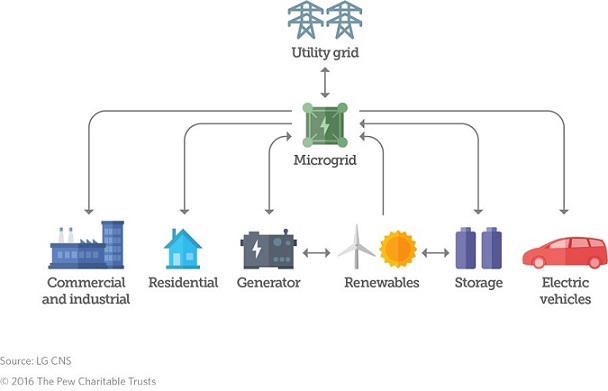 Nationwide, 124 microgrids with a total capacity of 1,169 MW were up and running across the U.S. as of year-end 2015. It’s predicted national microgrid capacity will rise nearly 145% to reach 2,850 MW by 2020.  Market value is expected to increase nearly 270% to surpass $3.5 billion, Pew’s research team points out in ¨Distributed Generation: Cleaner, Cheaper, Stronger: Microgrids in the Evolving Power System.¨

A first generation of renewable and low-emissions microgrids are cropping up in communities and cities in response to the growing threats to and escalating costs of producing and distributing electric power in ways that minimize greenhouse gas emissions and negative social and environmental impacts. Supportive, collaborative policies, regulatory market reforms and initiatives within and between nations, such as ARPA-E, are important drivers, but the process is a gradual and hotly contested one in the U.S., where much of the legal and regulatory authority resides at the state level, Pew highlights.

Higher grid efficency, greater reliability and resilience, lower emissions and lower electricity costs are among the prospective benefits proponents are looking to renewable and low-emissions microgrids to provide. Energy policy reform is required to realize their full potential, however, the Pew report authors state.

¨These systems tend to be underutilized and under-compensated for the services and social and economic benefits they provide. The traditional utility business model does not adequately incentivize either customer generation of power or efficiency. In addition, most regulatory policies are not designed for customers who are also generators, a factor that limits deployment.

¨An equitable regulatory environment for energy technologies would encourage greater adoption of microgrids and ensure that all economic, environmental, and security benefits and services of these products are recognized and captured.¨ 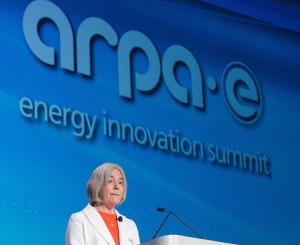 Dedicated to advancing cutting-edge energy technologies from early stage development to commercialization, ARPA-E (Advanced Research Projects Agency – Energy) leverages public funding and the resources of the DOE’s network of national laboratories to create R&D partnerships with promising young startup companies and entrepreneurs. Since opening its doors in 2009 with $400 million in federal funding, the agency has invested $86.7 million in 31 completed grid and distributed energy technology projects. Another 56 have been awarded grants totaling $154.4 million.

ARPA-E got directly involved in helping young companies develop microgrid technology in early 2015 with the announcement that its Network Optimized Distributed Energy Systems program would invest $30 million in projects that entail using microgrids to integrate clean and efficient generation with central power grids. The ultimate aim is to improve overall power efficiency and reliability and realize a 50% increase in renewable energy deployment.

The agency followed that up in November 2015, with the announcement it had awarded $2.4 million grants to 41 groups to develop a microgrid operating system that responds to changes in power availability and reduce the costs of doing so.

Whether or not today’s microgrid growth forecasts are realized depends largely on whether or not federal and state authorities continue to fund R&D initiatives and establish rules and guidelines that enable market participants and all stakeholders to derive full value from them, Pew’s report authors conclude. Doing so will help assure the U.S.’ ability to continue playing a lead role in the clean energy transition.

¨To overcome technical and financial obstacles, federal regulations and guidance must clarify the rules for integrating microgrids. In addition, government support for research and development and public-private partnerships will lead to lower-cost technologies and increased market adoption, resulting in a cleaner, cheaper, and stronger grid. Congressional support and investment in programs that ensure that the technologies of the future are developed and produced domestically are vital to maintaining U.S. leadership in the clean energy arena.¨