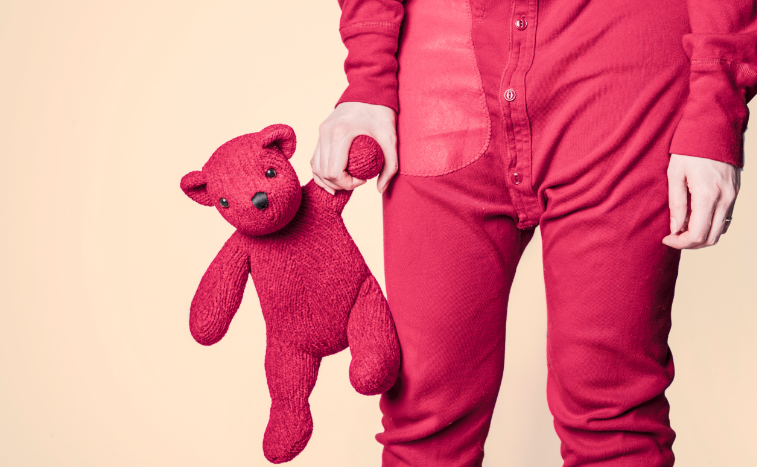 The term microgrid used to give utility executives sleepless nights and indigestion. These small, self-reliant systems would pop up, seemingly like mushrooms, within a utility’s service territory, threatening both the utility’s resource plan and its obligation to serve reliable power. They completely went against the grain of what utilities were all about: providing a standard level of electricity service to all customers from large, centralized power plants based around economies of scale.

The idea of intentionally islanding distributed generation (DG) from the wider power grid also raised public safety concerns, especially when it came to inverter-based distributed energy resources (DER) such as solar photovoltaics (PV). Furthermore, if these microgrids—typically deployed on college campuses, military bases, or in hospitals—worked well, they would contribute to the erosion of utilities’ fundamental business model; as customers deploy more and more onsite generation, energy storage (perhaps in the form of an electric vehicle, or EV, plugged in their garage), and have automated demand response capability (via smart thermostats and appliances), they reduce the amount of power provided by utilities and the revenue they generate.

Given recent deregulation trends, utilities themselves are moving away from this monolithic monopoly mindset. They are often precluded from owning new generation, no longer control what power is transferred over their transmission networks, and are increasingly called upon to resolve impacts on their distribution grids from DER they do not own or control. The world is changing. One can fight what appears to be the inevitable DER trend by opposing net metering or by increasing demand charges, or one can look into the future and articulate a new utility of the future that includes offering new services, such as microgrids.

Historically, private and public sector consumers not getting what they wanted in terms of reliability or renewables from their host distribution utilities developed microgrids. Yet, the concept of a utility distribution microgrid—a term first used by Navigant Research in 2012—turns this value proposition on its head. As utilities seek new business models to better manage both customer- and utility-owned DER, the UDM platform offers a path forward with win-win scenarios for each side.

Microgrids operated/owned by utilities can serve the distribution grid first and work as a platform for new utility services. UDM adoption is dependent upon regulatory reforms, natural disasters, and both customer and utility adoption rates of DER. Because of this, UDMs are expected to only be deployed for a small portion of the broad addressable market over next decade. Nevertheless, they are expected to capture an increasing share of the total microgrid investment stream.

How big is this market? According to a recent report from Navigant Research, the market for UDMs in the United States is poised for major growth. By 2024, annual investment in UDMs deployed by both investor-owned utilities (IOUs) and publicly owned utilities will reach nearly $1 billion. (Global growth, fueled by countries such as China, will surpass $6 billion annually by that same date, according to Navigant Research.) 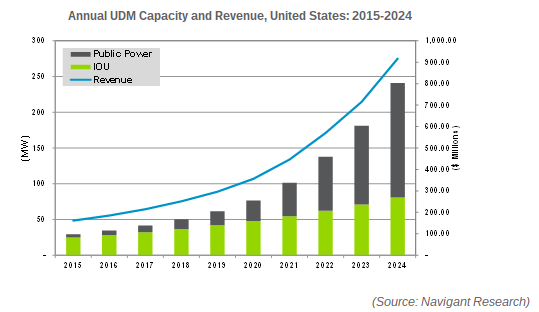 As noted in one of my recent blogs, the roles of IOUs and public power entities flip-flop over time.

Interestingly enough, unregulated arms of IOUs such as Southern California Edison, Sempra Energy, Xcel, and Duke Energy are beginning to invest in third-party microgrids as a business venture; the regulated side of the utility holding company will also play a larger role in microgrid deployments in the foreseeable future. Their public power counterpoints, however, will lead in new capacity additions due primarily to regulatory issues pertaining to the uncertainty surrounding the ability of rate-basing microgrid investments that might only serve a small subset of a utility customer classes. Smaller publicly owned utilities can move quicker due to less conflicts between customers and shareholders, as well.

Pessimists see growth in capacity from solar PV, advanced batteries, and other forms of DER as the supreme threat to incumbent distribution utilities, echoing the much-ballyhooed utility death spiral storyline. A new report from the National Renewable Energy Laboratory (NREL) is fueling this fire. NREL dramatically increased its estimate of the technical potential of rooftop solar PV in the United States to 1,118 GW, which represents the equivalent of 39% of current U.S. electricity sales.

Despite these large numbers, optimists see future growth in solar PV as an opportunity for utilities to reinvent themselves, aligning their business strategy with the emerging digital economy and creating new two-way and mutually beneficial relationships with customers.

Where does the truth lie? The key to future success in this emerging market for smart DER solutions is aligning the right technology with the right business model. Maximizing the value of each asset deployed within a network hinges, in turn, upon a controls platform that can anticipate the future, react to changing grid conditions on a sub-second basis, and incorporate contingencies to ensure reliability and resilience.

Utilities cannot move forward in this ever-shifting technology and policy landscape alone. They will need to partner with private technology companies. Of particular importance will be those offering intelligent software controls and energy storage devices—companies such as OATI, Sunverge, Younicos, and Geli. Large technology firms like ABB, GE, Eaton, or Siemens are also critical from a risk reduction perspective and engineering know-how. In short, the term hybrid will carry many meanings for UDMs, as different kinds of batteries, generation, and controls will be incorporated into increasingly complex microgrids that leverage technology advances being offered by companies both small and large.

UDMs offer the promise of allowing utilities to carve out a role in the future DER landscape. Rather than coming late to the party on DER technologies, utilities can now experiment with energy storage and optimize diverse DER portfolios within new distribution networks such as microgrids.

The bottom line is that utilities should continue to experiment with microgrid designs, business models, and creative partnerships with third-party providers. There is no clear, single path forward in the world’s best market—the United States—due to the variance in available generation resources, regulatory structures, and rate profiles. There will likely never be a “one size fits all” microgrid. However, since microgrids are so flexible and accommodating, a growing numbers of utilities will find value in exploring the emerging UDM landscape.

Peter Asmus is a principal research analyst contributing to Navigant Research’s Energy Technologies program, with a focus on wind energy as well as emerging energy distribution networks models such as nanogrids, microgrids, and virtual power plants. His expertise also includes wind energy, marine hydrokinetic technologies, and renewables generally. Asmus has 20 years of experience in energy and environmental markets, as an analyst, writer, and consultant.
Asmus is the author of four books covering key energy market issues: Reaping the Wind, Introduction to Energy in California, Reinventing Electric Utilities, and In Search of Environmental Excellence. He is a frequent speaker at industry conferences and he is quoted regularly in major publications including The New York Times, The Washington Post, The Christian Science Monitor, and Reuters. Prior to joining Navigant Research, Asmus was president of Pathfinder Communications, and was previously editor of the Clean Power Journal, assistant editor of California Policy Choices, and has written for a number of energy trade publications including Windpower Monthly and Electric Utility Week. He holds a BA in journalism from the University of Wisconsin.