Subsequent participation in “hackathons” in Finland and Dubai has generated international interest from various energy companies and spurred the creation of the PWR Company. It has also led to a round of international networking as the three budding blockchain-energy entrepreneurs seek to raise the capital they need to further develop and refine EcoCoin, their open source, P2P distributed energy trading software, and build a company.

It’s got to be heady, exciting times for Brendon Geils (USA), Simon Appel (Germany) and Hodge Hodgson (Germany) – the three “hackers” whose blockchain-based, P2P distributed energy trading software garnered them the top prize at Energy Academy Europe’s “Hackenergy 2016” – perhaps something akin to an amateur basketball or soccer player getting drafted by an NBA or pro soccer team.

Microgrid Media caught up with Geils, an Iowa State University (ISU)-educated electrical engineer, via email to gain a sense of the experience, insight into blockchain distributed energy application development and their EcoCoin plans.

Geils and Appel met as roommates at ISU. Both electrical engieneering students, their shared interest in high-tech has led to a lasting friendship. Entering Hackenergy 2016 with no expectations or specific project plans, the two connected with Hodgson during the competition’s weekend “matchmaking phase – tech project dating for nerds,” Geils recounted.

“We didn’t come into the hackathon with this idea, but as Simon and I are both electrical engineers we were moved by the idea and it’s impact on the industry,” he told Microgrid Media.

“We had an amazing team. A masters student studying in Germany, a member who worked extensively in the solar industry, and myself, a self-taught programmer from the States. The event also provided great resources from IBM technical leaders to industry officials,” Geils elaborated.

Blockchain has emerged so recently in the software and popular high-tech mainstream that development practices are yet to be fully formed and concrete, Geils responded when asked to offer advice to those looking to develop blockchains.

“If I had to name a few, I would suggest building off a platform such as Ethereum for your minimum viable product. Solidity, the smart contract programming language for Ethereum, allows quicker development cycles. Another tip is you don’t need to be a blockchain programmer to get into the space; anyone with solid computer science fundamentals should experiment with the technology.”

More specifically with regard to EcoCoin and PWR’s commitment to open source he added: “This project is something that would be applicable across many nations. We don’t have the ability to implement this solution everywhere.

“A solution that incentives green energy shouldn’t be kept from the public. With recent attention towards green energy we should be more open to sharing our findings. Like all open source, it will benefit from other users contributing to the project.” 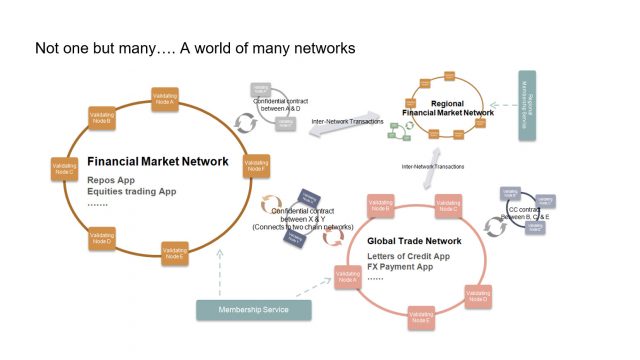 The positive responses to and expressions of interest in EcoCoin the three have received from hackathon sponsors, co-participants and energy industry insiders led them to take their “hackathon” project more seriously.

“Each time we present the idea we learn more about the institutional barriers that need to be addressed for the idea to work. We have been in conversations with multiple worldwide energy providers on implementing the solution,” Geils explained.

Highly regulated, conservative and risk-averse, it’s difficult for young tech innovators and entrepreneurs to gain entrance and credibility in the power-energy sector, particularly when proposing new technology with the potential to seriously disrupt the status quo, he added.

“This is a difficult environment to traverse as the energy sector has long been reliant on carbon-based fuels,” Geils continued. The transaction process that is currently in place is biased towards only buying energy from a provider. We plan to allow the process to be reversed and allow energy consumers to buy AND sell.”

The next steps for PWR Co.’s three founders is to continue traversing the energy sector in order to add to their knowledge base, connect with prospective partners that can lead to EcoCoin deployments and raise the capital they need to do so, Geils explained.

“Our planet is facing the consequences of huge carbon-based fuel reliance. There needs to be an incentive (that is profitable) for people to go ‘green,’” Geils added.

“The costs of solar/wind are now so low that this solution would be the final push that people would need to buy solar. Your neighbor would start buying solar panels left and right if he knew he could start profiting. Similar to how people have rental properties, this would be a passive income source, and an environmentally just solution.”